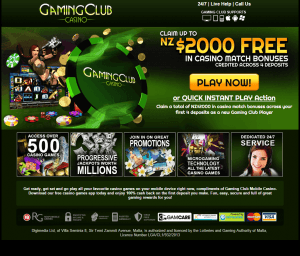 If you’re looking for a shoo-in mobile casino that really takes after its New Zealand players, look no further than the Gaming Club. After over 20 years in the online casino business, Gaming Club continues to thrill its every-growing legion of loyal fans all over the world.

In order to obtain and hold on to a stellar reputation envied by many, Gaming Club has had to pull out all the stops to keep its players happy and satisfy all their mobile gaming needs.  This includes premier Microgaming pokies and casino games, exceptional customer service, cutting-edge security, multiple transaction options, generous bonuses, and, of course, enormous payouts.

A Trusted Name in Online Gaming

Although the mobile version of Gaming Club only came out after the advent of smartphones, the standard online site has been around since 1994. If you know anything about virtual gaming, you’ll know that that kind of longevity is no mean feat and is a good indicator of a highly trustworthy site.

In addition, Gaming Club is licensed with the revered Malta Gaming Authority to prove that its payout speeds, fairness of play, security measures, and more are above-board.

Because Gaming Club exclusively uses game software by industry-leading developer, Microgaming, its pokies and other casino games are compatible with just about any smartphone or tablet. Mobile operating systems with the capacity to run Gaming Club games include, among others, iOS, Blackberry, Android, and Windows Mobile.

What’s more, Gaming Club also offers flash versions of all of its games, which means that you can play without downloading anything, directly via your device’s internet browser.

As we said, Microgaming is one of the biggest names in the mobile gaming software development industry. So many of the Microgaming titles available for you to play at the Gaming Club mobile casino have actually won awards for their incredible graphics, sound and game play.

This includes classic three-reel pokies as well as the latest video slots – such as Tomb Raider, Avalon, and Thunderstruck – as well as several progressive jackpot slots.

And Gaming Club hasn’t forgotten about its table games fans either. In addition to the pokies, you can enjoy roulette games, poker, and blackjack at the Gaming Club mobile casino.

The site even offers less typical casino games such as bingo and virtual race betting.

These pokies’ top payouts keep growing larger until someone manages to hit the jackpot which, by that time, has often rolled over into a truly life-changing amount. And these jackpots are up for grabs now at Gaming Club mobile casino.

In addition, all new players are rewarded for signing up at Gaming Club with a 100% match bonus on their first deposit and 150% on their second.

You really don’t have to worry about the security of your funds and personal details when you deposit money at the Gaming Club. That’s because Gaming Club is certified by eCOGRA – a respected independent auditor that checks up on mobile gaming sites’ security measures and more.

Gaming Club also accepts payments via a range of safe transaction methods for mobile players, including credit cards, debit cards, EntroPay Visa, NETELLER and Ukash. Plus, you can process all of your transactions in New Zealand dollars!